“I am looking forward to working with Tisha on this year’s Campaign,” said United Way of Van Wert County Executive Director Vicki Smith. “Tisha brings a great passion to the campaign chair position. She has been a strong leader in our community and was recently awarded the Women of Achievement award for overcoming adversity at the YWCA banquet. She is involved with Van Wert Rotary; she supports many community events with company sponsorships; she serves and volunteers at her church, Calvary Evangelical. Tisha has brought some great ideas to the campaign committee and has involved everyone in the process. Tisha is a great role model for many people in Van Wert and will continue to set goals for the Van Wert United Way to be a great place to give and advocate. It is going to be fun to see the excitement generated with this year’s campaign theme.” 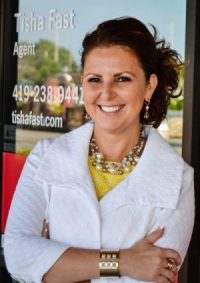 “I am proud and excited to be this year’s Campaign Chair. I want to really let people know who and what United Way of Van Wert County is. I feel it is important for people to know where their donations are going and how they are making a difference in our community. This year’s campaign theme is “What is United Way?” Most people have a general idea of what United Way is but not the full scope of what the United Way does and where their funds go. I personally have learned a lot as a board member of what all our county United Way offers and assists with. Our area has so many great programs to help those in need and we have an incredible community that has a strong sense of helping. That is what I love most about being part of such a great organization is that I get to see how much we are helping others and being part of our community that is willing to help in BIG ways. Being able to give back is so rewarding.” – Tisha Fast

Tisha is the owner Tisha Fast State Farm. Tisha is married to David, they have two children; Whitley and Clayton.