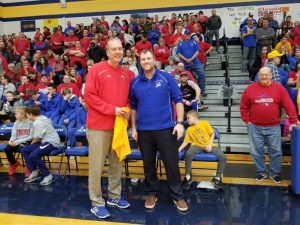 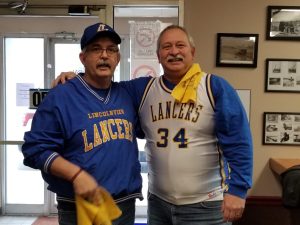 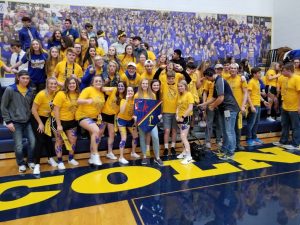 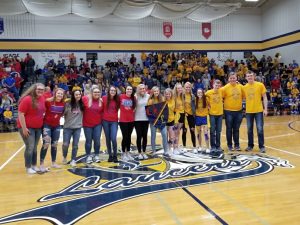 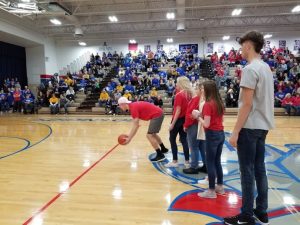 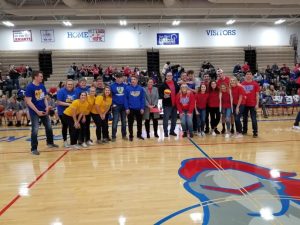 Rivalry Week was February 3 to 7 this year.  A new T-shirt design was created by Lincolnview’s Brianna Ebel – and $1500 from our sponsor, First Financial Bank was donated to Lincolnview’s school total.  Thank you First Financial!  A new event – the Social Media Challenge – was held on Monday… Schools and their supporters were asked to like, comment, and share a “Pass It Along” post to help us increase our Facebook following.  The response from both schools was great, and Lincolnview won the challenge.  Thank you CNT and Kirk Berryman for sponsoring that event.  The annual FFA game was held on Monday, February 3 @ 7pm at Crestview and Lincolnview was the winner.  Thanks to our sponsor, Convoy Tastee Freeze for awarding $100 to the winning team.  Thanks to Brewed Expressions who created “The Knight’ and “The Lancer” lattes and Flour Loves Sugar who made school-colored sugar cookies…A portion of sales were donated to the United Way.  Mother Nature gave us icy conditions Thursday and Friday, but both games went on as scheduled.  The Tailgate Party before the Girls game was sponsored by Tisha Fast, State Farm Agent, Kulwicki-Hilton Insurance, and Amber Davis, Realtor Schrader Realty. The Granny Shoot Out, sponsored by Tisha Fast, State Farm Agent and Kulwicki-Hilton Insurance was won by Crestview, as well as the Dash for Cash.  The Vantage Mystery Challenge, sponsored by Sisters Embroidery and More was another new successful event which ended in a tie.  The Staff Dodgeball Showdown, sponsored by Lee Kinstle GMC, was won by Crestview.  The D.A.R.E. Donut Eating contest before the Boys game was won by Lincolnview.  Students at each school held Spirit Week activities, but since there were only 3 days of school due to the weather, those totals were added to Friday night’s Dash for Cash donations.  When the dust settled, Lincolnview won the 2020 Rivals United fundraiser by raising $15,839.97 to Crestview’s $11,413.71!  Over $28,000 to help support the United Way agencies.  What a great job by both schools and communities!  THANK YOU EVERYONE!  Check our Facebook page for pictures.